From smog to blog

Posted on 17th December 2018 at 11:34
So, as COP24 comes to a close js global’s website goes live – and provides us with an opportunity to reflect on an intense two weeks debating the world’s changing climate and the challenges ahead. Held in the Polish city of Katowice – irony writ large with the Climate Conference being located in the heart of the country’s coalmining region of Silesia, where the taste of coal dust hangs in the air, smog is normal, and the day the delegates arrived to start the conference it was officially the second most polluted city in Europe.
Poland, relying primarily on coal for some 80% of its energy mix, is one of the EU’s highest polluters, and coal is the dirtiest of fossil fuels. But, maybe this was a good thing, particularly for some of the organisations operating in a business-as-usual bubble, to bring home the reality that the world still relies heavily on coal, and time is running out.
Two weeks of tough negotiations between nearly 200 countries culminated on Saturday with an agreement on a set of universal, transparent rules designed to control emissions and limit global warming. Sounds good – delivering the Paris climate accord of 2015 enabling countries to action the principles agreed then.
But – and after all there’s always a but – there were fierce disagreements on two specific climate issues. 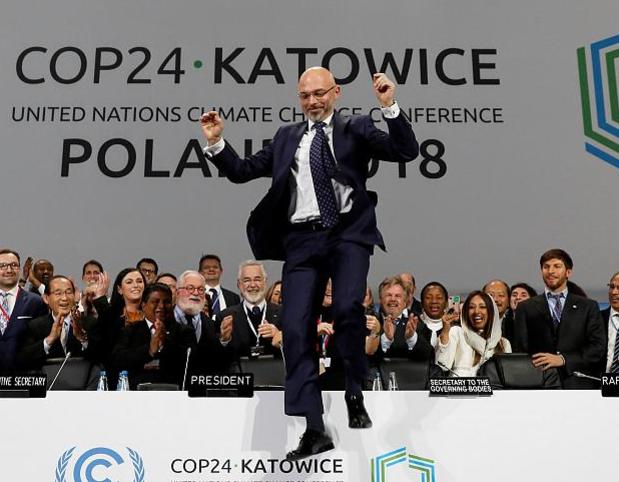 Decisions on pledging more ambitious action to fight global warming, and regulating the market for international carbon emissions trading (which came close to de-railing the negotiations completely) were kicked into the long grass to be dealt with at a later date.
The recent report by the IPCC (Intergovernmental Panel on Climate Change) concluded that we need to cap global warming at 1.5C compared to pre-industrial levels by the end of the century, and the good news is we can do it. It will require a radical overhaul of the global economy with – vitally – a major shift away from fossil fuels. Without this change we are on a trajectory to hit a global temperature rise of 4C before 2100 resulting in an unrecognisable, and unliveable world. The final text at the UN talks omits previous references to specific reductions in greenhouse gas emissions by 2030, and simply welcomes a “timely completion” of the IPCC report, not its conclusions.
The highlight of the conference for many was the moving speech from Sir David Attenborough, who so succinctly summed up the crux of the matter:
“If we don’t take action the collapse of our civilisations and the extinction of much of the natural world is on the horizon ………
Leaders of the world, you must lead. The continuation of our civilisations and the natural world upon which we depend, is in your hands”
Tagged as: Climate change, COP24, Global warming, IPCC, js global
Share this post: