Posted on 28th March 2020 at 12:35
There’s an eerie emptiness to the streets – from London’s busiest thoroughfares to the high streets of market towns, all are deserted after the UK Government dramatically increased the response to the Coronavirus pandemic and people have responded with immediate effect. Working from home, avoiding social contact, closing all places where people gather, the result is a disturbing and dystopian version of the landscape we are used to living in. The same empty-movie-lot scenes are being played out all over the world.
Before the coronavirus pandemic shoved all other news, local, national, international off the media agenda, climate change was right up there. The recognition that we need to radically reduce carbon emissions within 10 years was a message being broadcast from across the political spectrum; from central bankers to extinction rebellion activists, the call was loud and clear. Cut carbon or face a world of extreme and hostile environments resulting in devastating weather events and massive loss of species, with floods, fires, droughts and sea level rise already affecting vast swathes of the planet.
Nevertheless, within an extremely short timeframe there is evidence that nature is rebalancing. The Gaia hypothesis, first put forward by James Lovelock in the 1970s (and derided at the time) posits that all organic and inorganic components on the planet are part of one self-regulating system, working to maintain and perpetuate life on earth. Given the opportunity, the rebalancing of natural systems will occur. Welcome to the biggest experiment you will ever be part of – lockdown is providing us with compelling empirical evidence of what a low carbon world could be like. 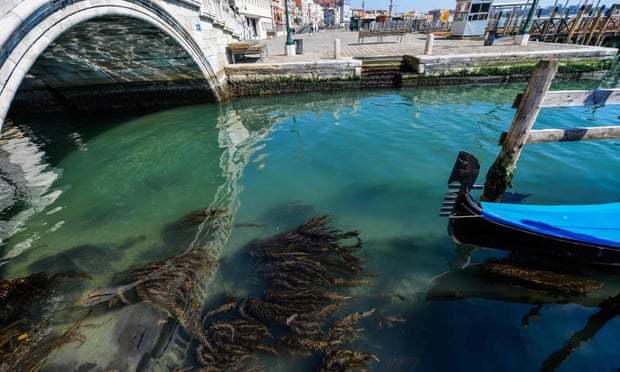 Seaweed clearly visible in Venice canals with the massive reduction in boat traffic
Coronavirus is estimated to have curbed carbon emissions in China by a massive 25 per cent. More than 80,000 people in one of the world's biggest industrial polluters have been infected, causing refineries and factories to shut down, and pulling back construction activities. This temporary reduction is by no means insignificant. As reported by The New York Times, the three-week fall equals about 150 million metric tons of carbon dioxide — roughly the amount that New York produces in an entire year.
Whilst Italy has felt the devastating impact of the pandemic in human terms, there are some good news stories to hold on to. Venice has been transformed - La Serenissima’s canals have emptied of the usual intense traffic, the public vaporetti water buses are running on a drastically reduced timetable, and of course the giant cruise ships have disappeared. And the clarity of the water has improved dramatically. Cormorants have returned to dive for the fish they can now see, dolphins are playing in the water.
In the UK, the shutdown has already resulted in a major upwards hike in air quality, with measurements of toxic small particulate matter down by as much as 50 per cent in some major cities. And the quiet – in the centre of urban areas the sound of birdsong is soothing frazzled nerves and providing balm to troubled souls. By hitting the planetary pause button, the world is starting to breathe again.
The economic implications are huge, and governments are having to support the populations of their countries at unprecedented levels never seen before, with the economic shock expected to lead to major global recession. However, as leaders plan stimulus packages to bail out their economies, there is a growing warning against a rapid return to “business as usual” replete with the huge inequalities, and environmental degradation which have characterised the larger economies, particularly as the world is currently on track to miss the emissions targets set by the Paris Agreement. Should that be the result, the impacts are too catastrophic to comprehend. There has been much posturing – particularly from major corporates and especially those in the “hardest-to-abate” sectors that hitting those targets has been deemed impossible. Well look at what’s taking place now it’s been forced on us – what once was impossible is now happening.
Whilst the impacts of the coronavirus in terms of human health have resulted in around 28,000 deaths so far and this number will increase significantly, pollution is already accountable for around 7 million deaths globally. If we take action on climate change, we will be taking action on the environment, pollution and human health and well-being. As we move into rebuilding the economy we must address the need to keep global emissions down head on, reduce the carbon intensity of the stimulus packages, and learn from the lab experiment we find ourselves in.
At JS Global we support businesses in addressing climate risk and opportunity, and provide specialist ESG and TCFD consultancy services across sectors as an integral part of an effective sustainability strategy
Tagged as: Coronavirus, Ecosystem recovery, Gaia
Share this post: